CBD Oil for Kids: Should You Buy It for Your Child?

Resources•Cannabis Guides•
CBD Oil for Kids: Should You Buy It for Your Child?

Should I give CBD oil for kids to my children — that’s what many a parent is wondering these days. With cannabis, and above all CBD, being praised as an absolutely safe compound, it’s only natural to start wondering. Especially so if you’re in dire need of something more efficient than a mere immunity booster.

It’s hard to say “no” when you’ve heard about the many benefits of CBD. Still, research including adult humans is scarce, let alone the number of studies on CBD oil for children. For this reason, having qualms about CBD oil effects on kids is somewhat common.

Some scientific research and anecdotal data are available, though, and we’re going to present to you everything there is to know about CBD oil and its impact on the little ones.

CBD, or cannabidiol, is one of over 100 cannabinoids found in cannabis plants. Cannabinoids are natural chemical compounds that have the ability to bind to our own endocannabinoid system (ECS). Hence CBD’s efficiency and the potential of CBD products for kids to affect them profoundly.

What is CBD oil good for? The answer is lengthy, but some of the treated conditions include insomnia, depression, anxiety, diabetes, obesity, cancer, HIV, multiple sclerosis, epilepsy, acne, arthritis, (chronic) pain, migraines, and so on.

CBD is not psychoactive in the same manner as THC — hence why it is so highly recommended. Even the WHO vouches for its safety.

It can be isolated from the cannabis buds in several ways (even at home). The oil form allows for a variety of products: pills, creams, patches, suppositories, tinctures, oils, edibles, and many others.

Is CBD Oil Safe for Kids or Not?

Let’s get rid of the elephant in the room straight away. Yes, CBD oil can be safe for children. We’re saying “can” as opposed to taking this information for granted so you don’t just run off to the nearest dispensary and buy the newest “vitamin” for your kid.

Here are a few things to bear in mind before making the purchase.

You wish only the best for your child, but opting for the best CBD oil for kids among a multitude of other CBD oils on offer can be a daunting task. You’ve noticed it yourself — CBD is advertised everywhere, particularly if you live in a state which enjoys great marijuana tax revenues.

There are several ways of discerning whether the oil is of the highest quality:

In short, be extremely careful as a survey from 2017 showed that mislabelling was common practice within the industry.

When you wish to choose the right type of CBD for children, this is of the utmost importance. CBD oil can be:

If you want to make CBD oil safe for kids, the safest bet would be to go for the isolate, i.e., pure CBD oil. You’ll be exposing your child to just one cannabis compound, instead of a multitude of others. Side effects are also easier to notice and you can stop the treatment if necessary.

Moreover, full-spectrum oils contain THC. If it’s coming from hemp, then 0.3% may not be a cause for worry as hemp is legal on the federal level. But, if it’s extracted from the cannabis indica plant, then the THC content could be potentially dangerous.

Once again, to get the best CBD oil, looking for a reliable supplier and third-party lab tests is mandatory.

How to Use CBD Oil for Kids

CBD can enter the body through different organs. Consequently, its impact can be felt in a matter of minutes or even hours. For example, if you let your child take CBD sublingually, it will enter the bloodstream directly. On the other hand, eating a CBD gummy or a cookie will allow the cannabinoid to be metabolized in the liver.

Exactly how much CBD is absorbed by the organism is not always easy to determine as the number of studies on this matter is fairly limited. What’s more, CBD oil effects linger for longer if they’re taken as an edible. The nutty and earth-like taste of the oil could be masked that way, too.

Potential Side Effects of CBD

Is CBD safe for kids and adults? Yes, but it is not absolutely harmless. The most common adverse effects refer to CBD overdosing. Dry mouth is one of them, and it can be followed by extreme nausea or sleepiness.

Nevertheless, the number one priority is taking care of whether CBD interacts with any medication(s) your child is using at the moment. Hence the following advice.

Before you give CBD a try, it’s mandatory to consult with a physician. They should be able to inform you whether CBD is the right pick or not. In addition, doctors are supposed to be informed about all the possible interactions with other medications.

On the other hand, CBD oil and children is not something frequently discussed in medical university curriculums, so your family doctor could lack sufficient knowledge about the topic.

To sum up, there are just too many variables to take into consideration when you want your child to begin taking CBD. Is the endeavor still worth it, though? Most certainly, as we shall see in the following section on CDB research and the benefits of CBD treatment.

How Can CBD Help Children?

Let’s take a look at some of the conditions for which we have concrete evidence (scientific or anecdotal) that CBD is beneficial to kids. Some of them are even life-threatening.

CBD Oil for Kids with Anxiety

Anxiety — mental or physical restlessness — can be an issue on its own, but it is also complementary to many a condition or disease, such as ADHD, autism, PTSD, and the like. Fortunately, CBD oil shows positive results in treating anxiety.

Here are a few examples regarding children (and not adult or animal) studies.

A 2016 study by the University of Colorado dealt with a case concerning a young girl who was suffering from anxiety and insomnia caused by posttraumatic stress disorder. The 10-year-old went through sexual abuse when she was just three and was living with addict parents until she was seven years old. By then, the problematic behavior including irregular sleep patterns, the inability to sleep on her own, and difficulty in coping with the school curriculum was already established.

The clinical study on CBD for kids with anxiety lasted for five months. The girl was receiving prescribed medications until her guardian finally decided on giving their consent for the girl to participate. She was given 25 mg of CBD at bedtime, and 6 to 12 mg of CBD sublingual spray during the day. Five months later, the girl was able to adequately deal with her school obligations and sleep on her own, without any signs of potential CBD side effects.

This case is usually presented as proof of tackling anxiety with CBD, but there are still more to follow.

CBD Oil for Kids with ADHD

Besides helping adults who struggle with ADHD (yes, ADHD statistics show it’s not age-limited), CBD oil for ADHD can be used on kids, too.

However, as John Mitchell, Ph.D., states, there are no clinical studies involving children. Studies with adult participants show promising results, as their attention spans increased with cannabis usage.

Regarding kids and cannabidiol, the Internet abounds with anecdotal evidence. Parents giving CBD oil to their children noticed a significant improvement in their overall behavior and sleeping patterns. Some of them even managed to reduce the number of ADHD medications thanks to CBD oil. This is not the same case for everybody, though.

CBD Oil for Kids with Autism

When it comes to the autism spectrum, there is official, scientific research to rely on.

Overall, CBD oil is efficient in reducing compulsive actions, violent outbursts, and promoting better speech and rest too. It is impossible to cure a child of autism spectrum merely by using CBD, but the side effects can be aided considerably.

Seizures are a common companion of autism, unfortunately.

The FDA-approved, pure CBD oil medicine, Epidiolex, is prescribed for children over 2 years of age and brings high hopes for further CBD research in young patients. In essence, Epidiolex is nothing else than a pure, hemp-derived CBD oil made in highly controlled conditions.

The drug is officially approved for children battling an extremely rare (and dangerous) case of epilepsy — the Lennox-Gastaut or Dravet syndrome. Without a doubt, Epidiolex is the best CBD oil for kids in this case.

Another renowned medicine is Charlotte’s Web. Oil from this high-CBD, low-THC hybrid strain is documented to reduce violent seizures. The CBD–THC ratio is 30:1. As a matter of fact, the strain got its name after a girl whose seizures plummeted from 300 per week to zero(!).

In addition, recent research conducted by Richard Huntsman, MD and pediatric neurologist, confirms a combination of CBD and a low dose of THC could be beneficial.

At the moment, no study or research can vouch for children. There is anecdotal evidence that CBD oil can relieve migraine pain in teenagers. However, as CBD has anti-inflammatory and pain-relieving properties which are documented in pain statistics, it is quite probable that it has a similar effect on younger patients too.

What Is the Recommended CBD Dosage for Kids?

The general rule of thumb applies to how much CBD to take as well. If you wish to begin treating your kids with CBD, start from the smallest dose possible, and scale up until you start noticing improvements.

The key is patience. Some children respond to the treatment immediately, others need more time, whereas some parents even believe CBD did nothing for their kid.

The topic regarding CBD and children is very much discussed, but not enough for proper manufacturing to begin. So far, we have witnessed only Epidiolex getting approved. The question is, how many children will have to suffer and endure all that pain until they are allowed by federal law to use medical cannabis? We all remember the case of a 12-year-old who sued the States for not being able to treat her epileptic seizures in her own state.

All things considered, CBD oil for kids is indeed beneficial. It has amazing medical potential which should be explored thoroughly. More scientific research and studies would pave the way for absolute legalization and mass production. As a result, millions of kids would be given a chance to live a healthier and happier life.

The short answer would be no. Both you and your child can get used to the benefits it provides, but that’s a different story. CBD is not physically addictive, hence giving CBD oil to children will not turn them into addicts of any sort.

The better term would be “uncomfortable.” CBD overdose exhibits various side effects, such as a dry mouth and nausea. It’s important to note that there are no records of a lethal CBD dose, nor of cannabis overdose with a deadly outcome. To avoid any issues, stick to the recommended CBD dosage.

Yes, as long as you use it responsibly and use CBD oil of the highest quality.

Table of Contents
What Is CBD? Is CBD Oil Safe for Kids or Not? How Can CBD Help Children? What Is the Recommended CBD Dosage for Kids? Final Verdict

43 American Exercise Statistics & Facts to Make You Move It

40 Serious Suicide Statistics & Facts for Everyone to Know 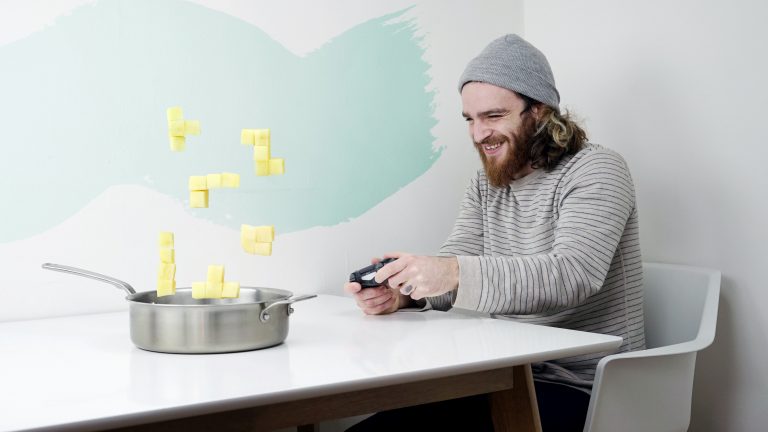 How to Make Cannabutter the Fast, Easy, and Delicious Way